We have collected the best of the best of the backgammon memes from the facebook group "Backgammon Memes", from the month of May. We have tried to rank them through: audience reactions (comments and likes), subjective laughter trigger and conceptual relevance, for instance a meme on a relevant topic will be evaluated higher. But the main thing: how funny the meme is!

Check out the list, and let us know what you think! Did we miss any memes? Do you agree with the winner?

No. 1 "Doggy dice sneaking up from behind". 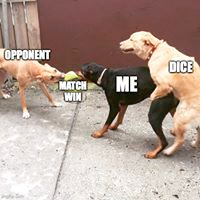 This brilliant meme, perfectly depicts the human emotions and the nature of the game that we love. Backgammon is truly "the cruelest game".

No. 2 "Bringing my Geoffrey Parker board". 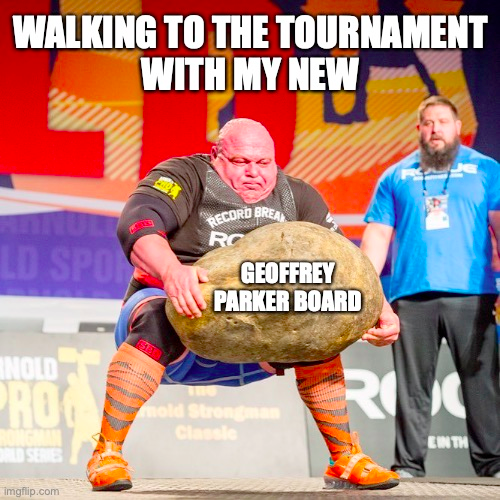 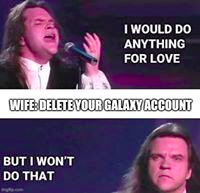 Michael Valliere That’s funny Elena Evans In my case it's my husband asking. Ali Biron So freaking funny. There is a limit in what you could be pushed to do. Deleting the galaxy account ain’t one of them Joshua Riddell Take a break from Galaxy? Fine. Delete the account? That could be a deal breaker lol!! Chris Trencher This is probably my favorite so far! Ralph Burd Good one 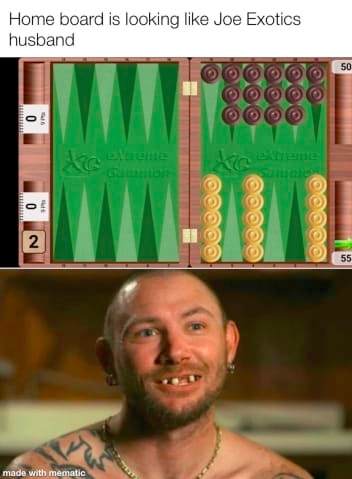 You probably need to have seen "Tiger King" on Netflix, to understand this meme. 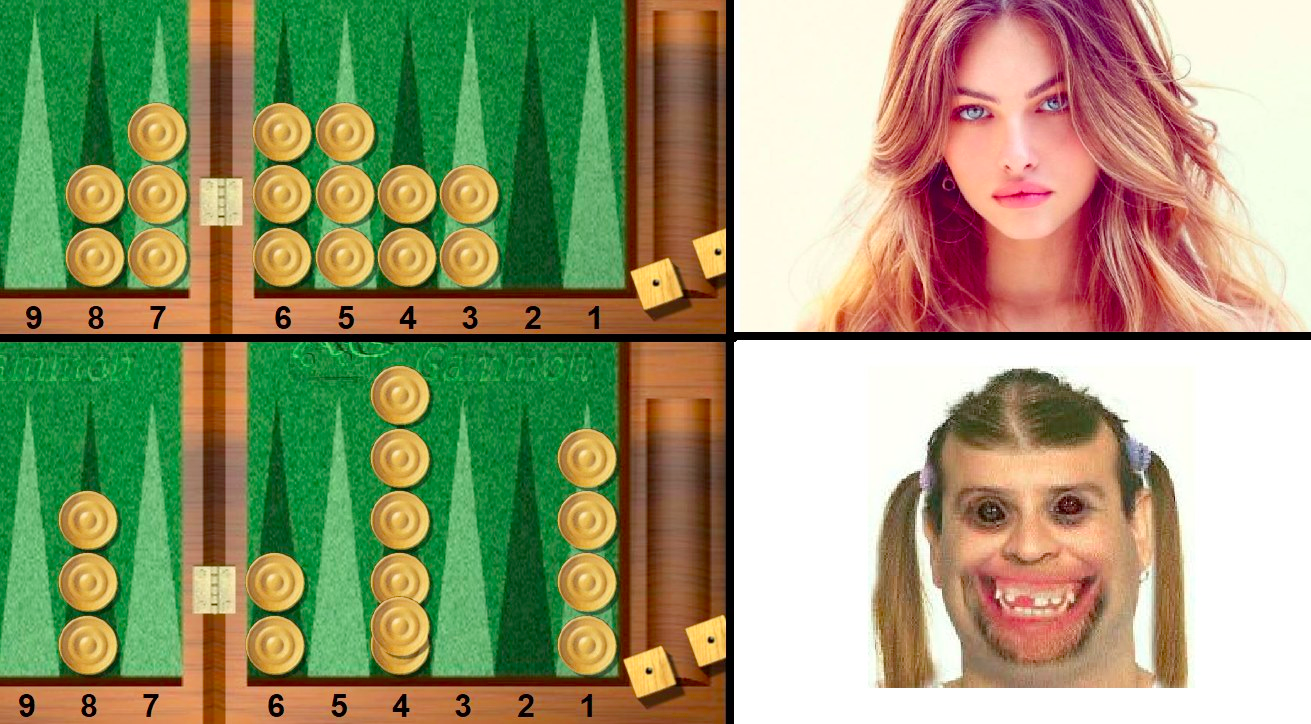 If you are a backgammon nerd, you get this meme. The inherent beauty and ugliness in backgammon structures.

Tobias Hellwag In this no contact position I see the beauty in the bottomside Theodosis Badas i see u bro,3 shots needed though;] Marcus Reinhard Both are in the recall for Germanys next blotmodel TV show 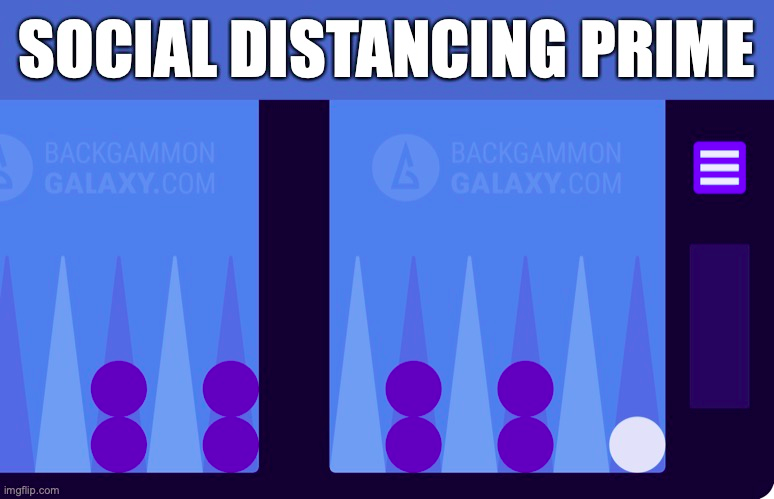 This meme reflects the current state of society in the Corona crisis.

Rick Gardner Haha, now that’s really hilarious and smart as hell to me! Very good, I love it!

Fred Westerby In Norway we call it the Swedish prime! 🤪

Jeff Schwarz You must be Yurpean (social distancing defined as >2 meters). Here in Murica (social distance > 6 feet) we'd make the meme with them 6 points apart. 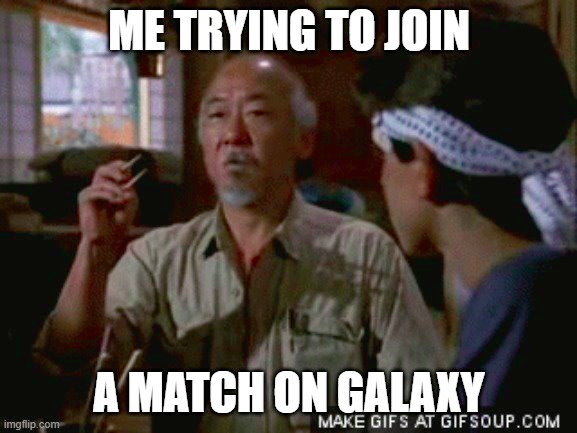 This meme reflects the problematic join functionality on Galaxy. It is a problem Galaxy is trying to solve, but for now, this meme is perfect.

35 likes. Facebook comments: Ali Biron So true. GL Harvie No shit... and then scrambling when you hit the wrong one before the guy accepts!

No. 8 "When idiots try to cheat with rating". 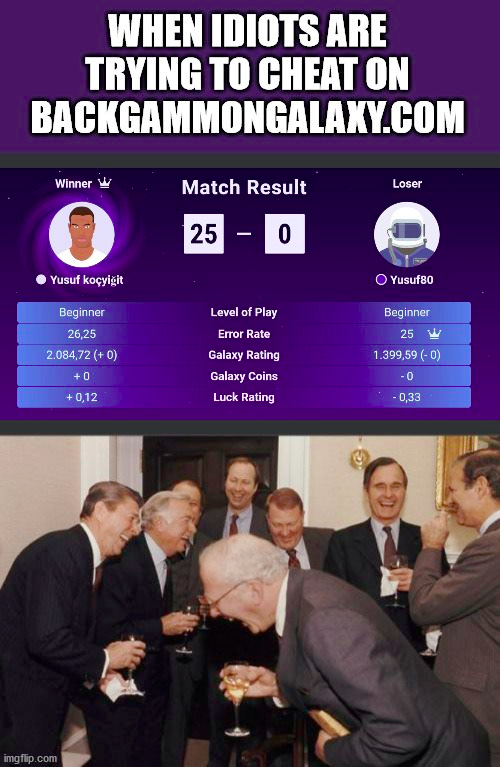 When idiots are trying to manipulate their galaxy rating by dumping rating, they must play the better PR and win the match.

56 likes. Facebook comments: Guy Anisimov Go easy on this guy... he’s ok Ron March Is there any difference in the rating of the player you play with? Or are they just a better player? For instance, if you beat a higher rated player do you get more points that an equally rated player? Marc Brockmann Olsen Yes, of course. There is a huge difference. Justin Nowell Any time I see a 25 point match being played I’m suspicious. David Klausa I agree. My opponent just didn't have it at the time. Jad Abdallah 😂😂😂😂😂 Hilarious Elliott Buckworm Maybe it was the same person on two computers and he got confused 🤡 Joshua Riddell I still like the one guy who actually told the "lower rated" accomplice, "that's why I tell you to press double to quicken the game." 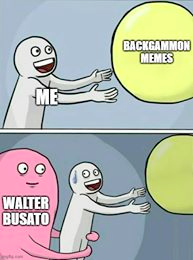 Posted by Simon Carter. The Busato phenomenon arose in the month of May 2020, where Walter Busato went from being an unknown to being one of the most famous backgammon players on planet Earth, by his persistance of posting memes of himself defeating other players. This memes reflects that superiority in meme making of Busato.

22 likes. Facebook comments: Wilson Semilio Hahaha! This is my new favorite 😂 Marc Brockmann Olsen 😂😂😂 BG Viholt I don't really get this one, but still I'm laughing 😂 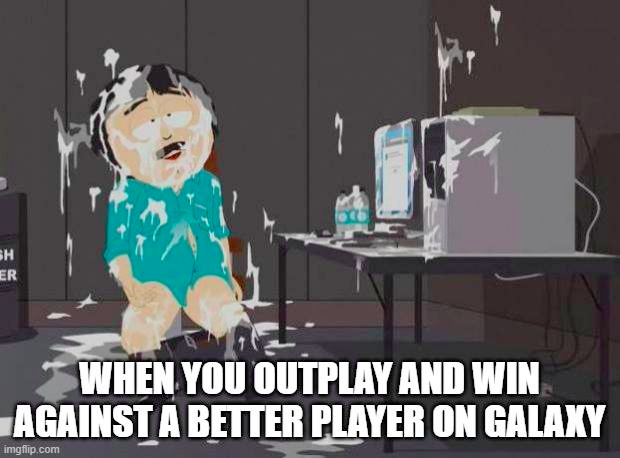 This dirty meme was posted by Simon Carter, and reflects the emotion of winning both match and error rate battle, to win Galaxy Rating.

Tue Kehlet Krogh Rasmussen I'll keep it unless the thought-police comes running. Personally, I found it was definitely smirk worthy

John Gamalielson I need a new nickname. Watch out if you get an invite from "Sticky Mouse"

Mona Mazza I couldn’t understand it, until I read your question...then I giggled 😅

almost made it to the top10: 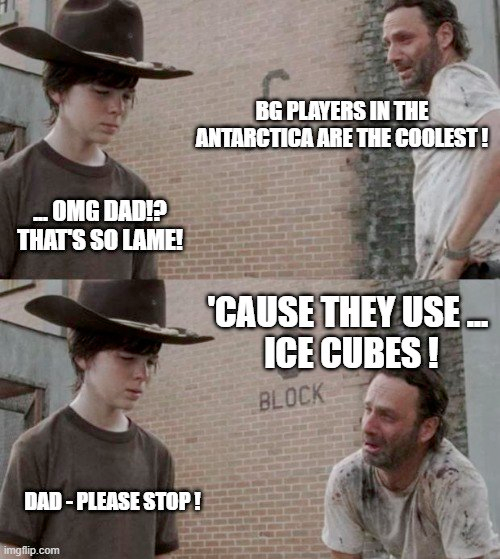 And this one, related to the "Rigged dice" category of memes: "Marc Olsen when accused of Rigged Dice": 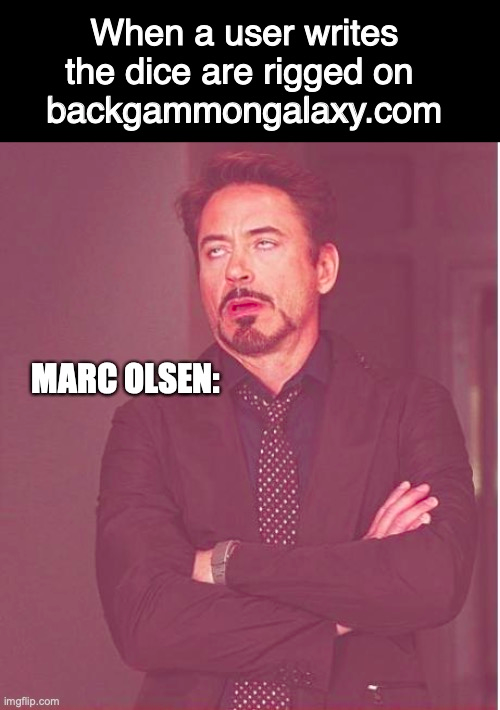